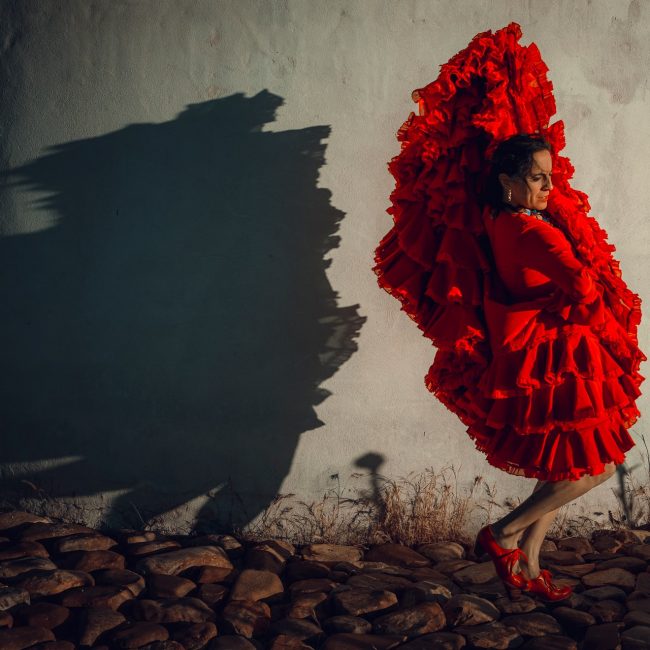 Sara Nieto finished the Conservatory of Spanish Dance in 1998 in Madrid and continued studying both at the Casa Patas Foundation and at the Amor de Dios school. Her studies are completed with monographic courses by Aída Gómez, Pedro Azorín, Julia Estévez and Silvia Mira in Classical Dance training.

Today, Sara continuously combines the stages at the hands of different flamenco masters with the foray into new artistic fields such as theater or the circus, which bring new perspectives to dance. She has worked with Javier Latorre (National Dance Award 2011) in his show The Quijote, premiered at the Teatro Coliseum Gran Vía and taken on tour throughout most of China. She becomes part of the prestigious LOM Imprebís theater company as an actress and dancer and with which she was nominated for the 2015 Valle Inclán Awards thanks to her performance in the play Black Decameron, which has toured throughout Spain, Africa (14th Yeleen festival, Burkinna Fasso) and Peru (Lima, Japanese Theatre). With his own company he premiered Flemish stories, mix colors y becomings, the latter in Algiers and Oran.

Premiere The Bird of the Soul, a show where theater, circus and flamenco come together and where Sara enriches herself by adding new elements to her own vision of Flamenco. She has also created the show Brigade women y Flamenco from Candil, moving and original stories that leave no one indifferent. The show of him Flamenclorikos, sIt was presented in 2015 in Algiers, Annaba and Bejaia with great success, by the Cervantes Institute, the Embassy of Spain and the Casa Patas Foundation.

She participates as an actress and dancer in Black Decameron and in the work MOON. In 2021 together with the collective FolkCorpLab wins the Spanish Dance and Flamenco Contest.

In 2019, she participated as a dancer in the international final of the Red Bull battle of roosters.

Dancer and Choreographer of the theater piece Bernarda Alba's house.

your new job smell of time has been selected for one of the most important flamenco festivals this year.

In September 2022, he debuts with his team at the Integral School of Flamenco Temple, where they hope to provide their students with a joint knowledge of Flamenco art and a place where they can develop professionally. 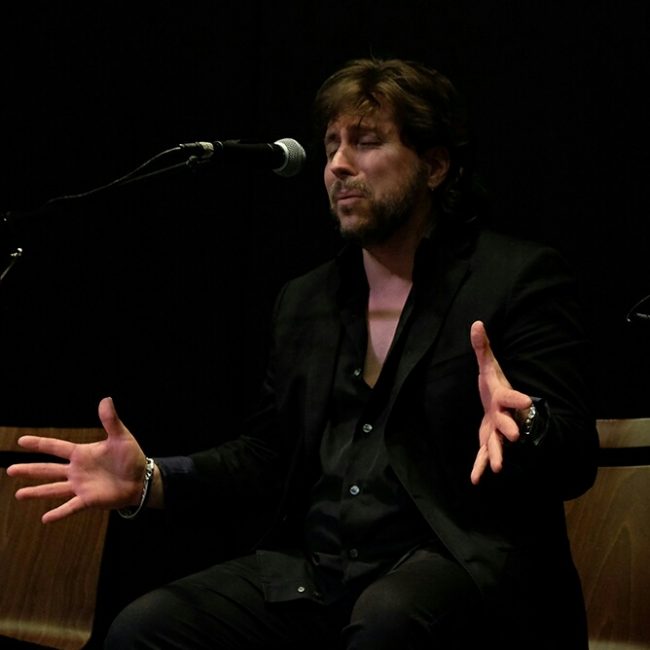 Teacher of Singing and Combos-Tablao

Pedro Sanz was born in Madrid into a family that is not linked to the world of flamenco, but that is no reason for him to soon feel the call of this art and make it his own. At the age of 16 he made his debut at the Alcazar Theater in Madrid. From that moment on, he began his professional career and, for this, he was concerned both with the classical repertoire of flamenco singing and with the care of vocal technique, taking voice classes with the prestigious Argentine singer Olga Manzano. In 1995 he wins the “La Silla de Oro” Flamenco Cante contest in Madrid. His training is basically self-taught, but thanks to his hobby he entered the flamenco circles of Madrid, coming into contact with masters and fans of this art. Later he will debut in the different tablaos of the capital such as Casa Patas and many others. Thanks to his time at the tablao school, Pedro Sanz has the opportunity to sing for different dance figures and promises, including: Blanca del Rey, Tomás de Madrid, Miguel Sandoval, La Tati, La China, Joaquin Ruiz, María Juncal, Joselito Fernández, Soraya Clavijo, Inmaculada Ortega, José Barrios, Belén López, Sergio Aranda, Rafael Peral, Marisa Adame, Jesús Fernández, Adrián Sánchez, Alfonso Losa, Juan Andrés Maya and many more. Classical singer and follower of the most traditional flamenco schools, Pedro Sanz shares the stage with leading figures of the likes of José Menese, El Yunque, El Loreño, Capullo de Jerez, Chano Lobato, Chaquetón, Fosforito or Arcangel. 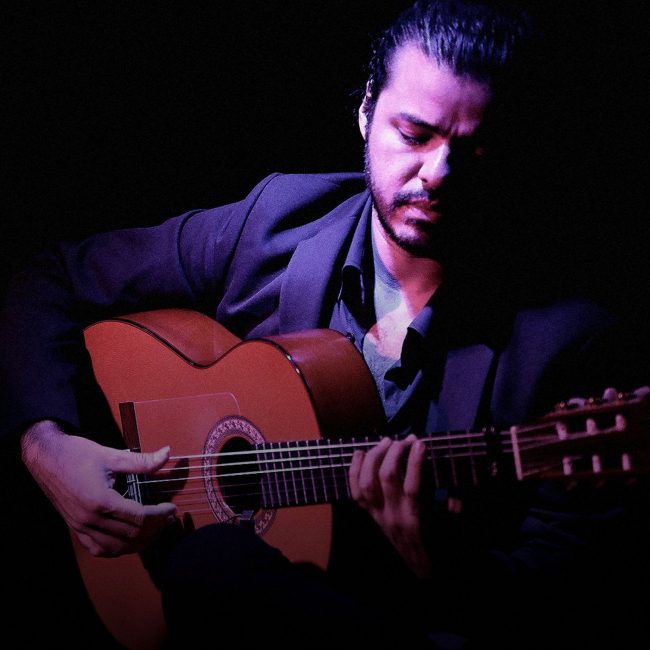 Roberto Monteiro Bastos (1987) from Rio de Janeiro, Brazil. He began his studies in Classical Guitar at the age of 16. There he did a higher degree in Guitar pedagogy at the Federal University of Rio de Janeiro, where he also knows Flamenco Guitar, with teacher Mara Lúcia Ribeiro (one of the first flamenco guitarists from Brazil, disciple of master Entri, from Cañorroto).
From then on he dedicated himself entirely to flamenco, arriving in Madrid for the first time at the age of 24. He worked for a year and a half in Japan, working as a flamenco guitarist and on his return to Brazil he accompanied various renowned dancers such as Carmen La Talegona, Domingo and Inmaculada Ortega. At the age of 27, he settled in Madrid formalizing his Flamenco Guitar studies at the Arturo Soria Superior Conservatory. He worked with the Alejandro Molinero company in the ADM show.
He currently works as a guitarist in various tablaos in Madrid, being the artistic director of one of them, Sala Temple; he accompanies renowned singers from the Spanish pop scene such as Lola Indigo, María Pelae and Vicente Navarro and the dance companies, Matices and ADM. 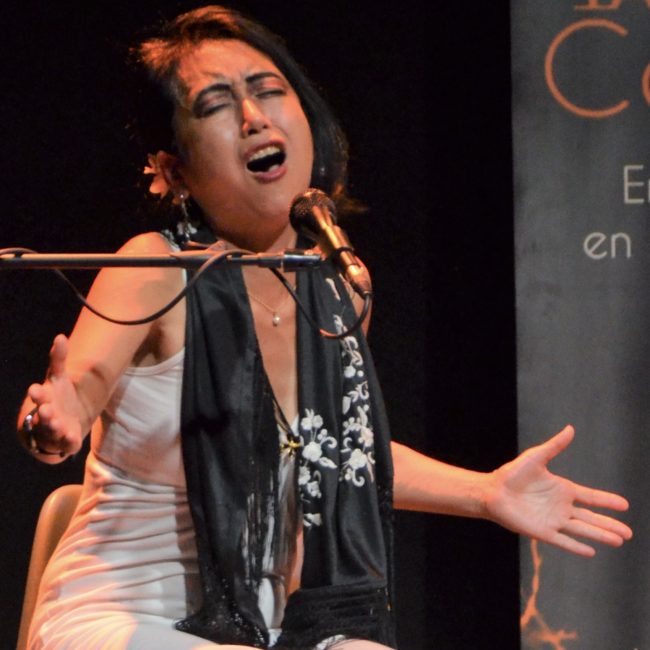 Self-taught singer in her first 10 years in the US and when she came to Madrid she studied with Talegón de Córdoba, Julián Rodríguez, Rafael Jiménez “El Falo” and Arcángel. In 2001 she participated in the “Silla de Oro” contest (Madrid) and in 2002 in “reencuentro” with dancer Joaquín Ruiz at Teatro Pradillo (Madrid) as a guest artist. From 2002 she works with the company “Flamencos en route” (Switzerland) and at the festival “Bolzano Danza” (Italy), and from 2003 with the company “esencia Flamenca” (Madrid). In 2006 she participated in two pageants; “Villa de Guadamur” and Peña Fosforito from Villa del Río (Córdoba). She was part of the flamenco group “Flamenco Íntimo” at Artebar La Latina in 2008. She performed old school cantes for 5 years accompanied by David Serva and then another 5 years in the Ziryab group at Café Ziryab.
He gave classes inside and outside of Spain, for professional dancers and for fans of cante.